New Thunderkick Casino Sites Thunderkick creates online slots that are easy and simple to play but also present interesting experiences for everyone to enjoy. The special features Thunderkick games are filled with provide versatility to the games and ensure they feel fresh and can endure even a longer game session. It has become exceedingly important to provide players with an opportunity to access games at all times and Thunderkick answers to this demand with games that a compatible with all the current computers and mobile devices. In this article you can read more about Thunderkick, the games it provides and casinos you can play them on.

History of Thunderkick Thunderkick has a very short history. It was founded in 2012 after identifying a market gap in the online gambling platform. They opened two offices during formation, in Stockholm and Malta, with an aim of improving the playability features of iGaming. They also aimed at providing quality games rather than clones with different graphics.

Thunderkick developed and launch its first-ever slot in 2014. At first, the reception was poor, but they began gaining more fans. Many casinos trust them. It is easy to see this when viewing the list of casinos that cooperate with them. For the players, it means that they can find their slot games in hundreds of online casinos. 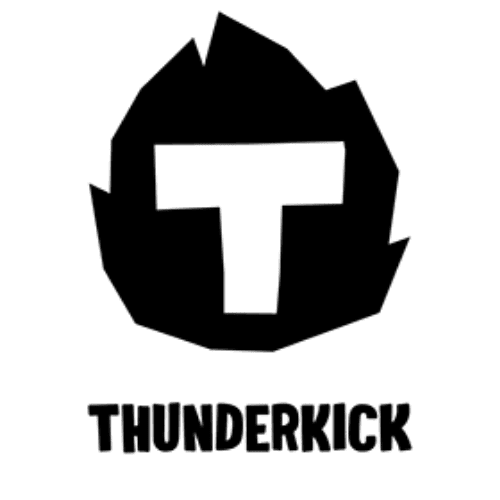 Nitro casino is a new BetPoint Group Ltd. initiative that launched in 2020 and is now licenced by the Malta Gaming Authority (MGA). From the design and rapid-loading games to the speedy payouts and adrenaline-boosting prizes, everything about this casino site screams speed.

Golden Star is an international casino site that has been around since 2012. It was founded by Dama NV and continues to operate under a license from the Curacao Gaming Commission. Its website features a homepage with high-end graphics and portrays a cocktail party vibe. Gaming freaks will be pleased with this slick user interface design.

J.V. Spin Casino is a new website owned by Zavbin Ltd. It was recently introduced to the market with over 7000 games to choose from. The site has some amazing features and offers such as free spins with no deposits. It is accessible to casino players globally, with headquarters in Cyprus and a license from Curacao.

Gammix Limited Casinos owns Locowin Casino, which was launched in 2019. The Malta Gaming Authority licenses and regulates the casino, which is home to some of the greatest brands in gaming. LocoWin is a fantastic virtual gaming destination with tones of incentives and promotions, as well as hundreds of fascinating games from some of the industry's biggest names. This casino is eccentric if you don't want to use a bonus. There is a large range of games to choose from, and they all operate well.

Pocket Play is a virtual casino owned and operated by Deep Dive Tech B.V. It has been in operation since 2020. Pocket Play Casino offers a wide range of games to players in selected countries. It is registered and licensed by Curacao Gaming Control Board. When players open the casino, they land on a brightly colored homepage with golden highlights. There, players can play hundreds of titles divided into different categories.

SOL Casino was established in 2018 as a subsidiary of Galaktitka N.V. and is licensed by the Curacao government. SOL Casino is an appealing option for players from all over the world, offering a diverse range of gaming options, a modern platform, and a number of interesting promotions.

New Thunderkick Games Thunderkick is one of the best developers of slot machines. They have a wide variety of new games with different themes, layout, and features for both new and experienced players. Moreover, they strive to get out of interesting games regularly. Jin Chans Pond of Riches is the latest edition slated for release in September 2020.

About the Thunderkick Game Selection

Thunderkick focuses its activities on the production of slot machines. This is the most interesting niche because it targets a maximum number of players, including the youngest. Unlike traditional casinos, the player simply needs to have access to a stable internet connection and a cell phone or computer. Experienced or beginners, players will connect easily from online platforms such as browsers or applications.

Thunderkick's games have a variety of themes. They range from fruit to dragons, carnival to the world of knights. However, they all have one thing in common. They are all attractive. Often the player will have to conquer one level before moving on to the next.

Trusted Thunderkick Casino Sites After reviewing hundreds of online casinos, it's always a good idea to make sure that the site you've chosen is trustworthy. The first thing to check is that the casino makes available to its customers all the important information including the license (or licenses), the country where the casino is registered, its legal address and other information. Another way is to check the certificates of its partners and third parties. Any self-respecting casino will provide its customers with a complete list of the companies it cooperates with. This includes both game developers and financial partners. None of them will work with an illegal casino.

Hacking, phishing, and online fraud are becoming a common phenomenon nowadays, posing a security threat to many online casinos and their users. To eliminate the threats and prevent a breach of customers' information, they apply stringent tech security protocols, such as a secure socket layer (SSL). The main purpose of SSL is to create a safe communication link between the server and the client. That happens through a process known as encryption. The players' account remains protected, as no unauthorized personnel ought to access the stored data. Only the casino server has access to the stored information and data.